FCSB (Steaua Bucharest) vs Lazio will meet today Thursday, 21:05 CET, UEFA Europa League Knockout stage. The match will be liveTEXT  on Footballbetexpert  and live on TV at ProTV. Second leg at Rome’s Stadio Olimpico on 22 February.

FCSB (Steaua Bucharest) vs Lazio. HOT News: FCSB striker Denis Alibec will not play against Lazio. The talented Romanian striker was initially announced to play from the first minute, however, it seems that he got injured in the last training session and will miss this important game.  On the other hand Ciro Imobile the Italy forward, who has scored 26 goals in all competitions so far this season has still muscular problem and will be replaced in line-ups with Luis Nani.

There have been no previous meetings between the two legendary clubs. FCSB (Steaua Bucharest – European Champions in 1986) have never beaten Italian opponents in 13 previous attempts, although Lazio’s record against Romanian clubs offers some hope: they have won one of their four matches. FCSB qualified as runners-up of Group G, behind Viktoria Plzeň, while Lazio won Group K. Both clubs ensured their passage to the knockout phase with two games to spare, FCSB having collected ten points from their first four group games while Lazio, alone among the 48 participants, claimed a maximum 12.

This team have faced Italian rivals 13 times and never celebrated victory, failing to score in all but one of those matches (a 3-3 home draw with Napoli in the 2010/11 UEFA Europa League group stage). Their eight defeats include two in five home games and a 4-0 loss to AC Milan in the 1989 European Champion Clubs’ Cup final. FCSB have picked up where they left off before the winter break, the Bucharest side winning once and drawing once since the Romanian First Division resumed earlier this month.

FCSB won their opening three games in this season’s group stage but finished two points behind Plzeň in the final standings despite a six-point advantage over the Czech side at the halfway stage.

UEFA Cup semi-finalists in 2005/06, FCSB have now reached this round of the UEFA Europa League three times from seven group stage participations. On each of the previous two occasions they were paired with Dutch opposition, losing both games 1-0 to Twente in 2011/12 and then overcoming Ajax in the first ever UEFA Europa League knockout phase penalty shoot-out after two 2-0 home wins a year later.

Lazio are unbeaten in their four matches against Romanian sides, winning one and drawing three. The sole victory came on the Rome club’s only previous trip to Bucharest, in the 2007/08 UEFA Champions League third qualifying round, when they came from behind to win 3-1 against Dinamo Bucureşti and seal a 4-2 aggregate victory.

Lazio’s run of 27 UEFA Europa League group games without defeat (W17 D10) ended with a 3-2 loss at Zulte Waregem on matchday six. Nevertheless, they have now qualified for the knockout phase in each of their last five participations

Lazio are currently in crisis. They winless in four domestic games, and lost 4-1 to fellow UEFA Europa League contenders Napoli on Saturday night.

Romanian international Ştefan Radu has been a Lazio player since 2008. He was in the Dinamo Bucureşti team that lost 3-1 in Bucharest against Lazio in 2007 but captained the Rome club in their only other European encounter on Romanian soil – a 0-0 draw against FC Vaslui in Piatra Neamt in the 2010/11 UEFA Europa League group stage.

Last matches away for LAZIO in the last 3 months

Steaua Bucharest are very hungry to make a good result tonight in front of their own fans (is expected that National Arena will be at full capacity tonight with 55000 football fans attending the game). If Steaua will manage to speculate the bad form of Lazio and play aggressive in compact structure horizontally& vertically then they have a very big chance not to concede goal and score at least once. They have experienced players like Budescu which can make the difference but also they have a very young goalkeeper Andrei Vlad (only 18 years old) without experience in European matches.

Check out and keep up-to-date with all the UEFA Europa League  match action as it happens via FootballBetExpert advanced widgets. Just click on any game to see deeper statistics than ever before for teams and players, boosted match visualization including new ball tracking and on-pitch animations. Last but not the least versatile bet-promotion options via overlays. 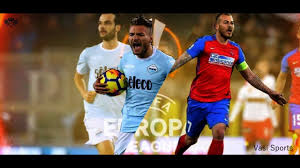