As of the 14th June, the attention of football fans and bettors from all around the world will be on the World Cup Russia 2018.

This is the perfect time to look at the best odds to win the World Cup Russia tournament.  32 teams displayed in eight groups will fight for World Cup trophy. Every group is equally balanced and composed of four teams which includes one of the favorites, a few middle pack teams and an underdog team.

If you want to bet outright on the winner of Russia 2018 World Cup then we can recommend to visit new online sportsbook Betzest that will have all the betting odds listed.

After the first 6 matches in each group have been played, only 16 teams will qualify to the second stage, the round of 16. Betzest will have very good betting value with every match covered with the best mobile odds and a fantastic welcome offer.World Cup winner betting odds

Some of the usual favorites such as Netherlands, Chile and Italy, have all missed out, however, there are plenty of other great teams looking to win world cup Russia 2018. The most favorites in the online betting markets are Germany, Brazil, France, Argentina, Spain, England, Belgium, along with the European champions Portugal, Colombia and Uruguay.

Football betting prediction on who will win the World cup are mainly marked by the outcomes of each group games and strength of each team moving on to the knockout phase.

We, at FootballBetExpert.com, have analysed all information in depth to try and figure out the favourites to win the World Cup 2018.

We have taken it a step further and used our advanced widgets to predict which football teams should have the best odds of getting out of their groups and moving on to the knockout round of the World Cup. 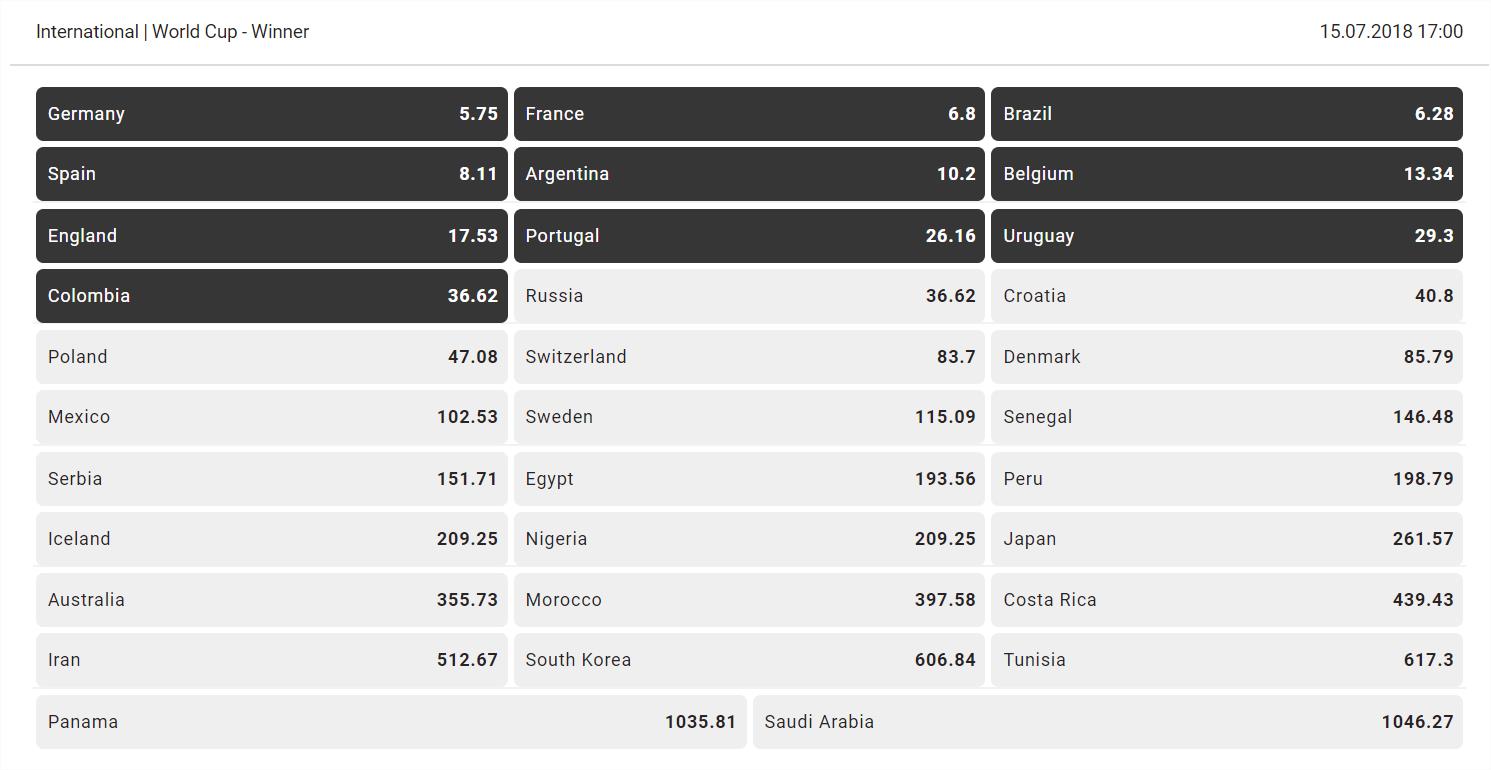 (1) Germany – 5.74 : The current holders of the World Cup will certainly be again one of the principal favorite team to win the tournament. They are the betting favorites as well. Germany made many changes in the team since World Cup in Brazil in 2014, however, they always had many world class players and were invincible in qualifying with a impeccable record of 10 wins from 10 matches scoring 43 goals in total. Some of the most experienced players have been replaced successfully by young players.

(2)Brazil – 6.26 : Is the second favourite to win the World Cup tournament in Russia. Current team seems quite strong compared to past World Cups. In the last World Cup hosted in their home country they were defeated drastically 7-1 by Germany in the Semi-finals. However, the hopes from the current team are quite high, as they managed to score 41 goals in their qualifier matches.

(3)France – 6.78 : France is the third favorite to win the world cup, not only because of their past game record when the France  has been one of the strongest teams in the world, but also because they have a  talented team currently and boast plenty of young players.

(4)Spain – 8.34 – One of the most powerful football teams worldwide is considered the 4th favourite to win the World Cup in Russia. The team has shown a great performance in the qualification stage by winning 9 out of 13 matches. While placing your bet at Betzest don’t forget their fantastic win in the 2010 World Cup. Spain will have to fly almost 7,000 km in Russia! (Click here to read more).

(5)Argentina – 10.17 – Is considered by Betzest new online bookmaker the 5th favourite to win the World Cup. They performed exceptionally well in their qualifiers and reached the final in 2014, hence, is one of the most unpredictable teams with exceptional players. Further more, they have Messi as a captain and Top scorer (Click here to read more), considered the greatest player worldwide of all time. Messi career is impressive and he has achieved everything– the only thing missing is a World Cup.  Will be interesting to watch and see if “all planets will align” and Argentina will win the trophy in Russia.

(6)Belgium – 13.3 – Belgium did exceptional in the qualifying groups and continues to impress with their ascendance therefore is strongly considered as the 6th team to win the World Cup in Russia. They have many players capable to make the difference, win important games and reach the maximum at this tournament.

(7)England – 17.73 – England have quite a young team, with no experience of World Cup tournament football, however, as a team, they have a lot of potential. From the training camp set at Repino in St. Petersburg, Southgate players have to travel 1,582 km to Volgograd on their debut with Tunisia, then 930 km to Nijni Novgorod for the duel with Panama and another 824 km to Kaliningrad for the last game against Belgium. Distances doubled by the way back, swallowed in 10 days (Click here to read more).

(8)Portugal- 26.07 –. With ambitious Cristiano Ronaldo (voted the best player in the world for the second year running) in their componence, European champions ​Portugal are the 8th favourite team to win World Cup Russia 2018.Cristiano Ronaldo scored  79 goals and he  needs another six to go second on the global list behind Ali Daei (109). Encouragingly for Cristiano (32-year-old), he got 13 goals in 13 appearances for Portugal in 2016 and 11 in 11 last year. After maxim focus and concentration that leaded to win the European Championship in France, will be interesting to see if Fernando Costa will manage to motivate and squeeze the most from his team at the World Cup Russia as well.

(9) Uruguay – 29.2 –In the last few years they run through mediocre form, however, with an fantastic physical team backing up an incredibly potent forwards line they become unpredictable and can win  important games. With a great attacking duo, composed of top players Luis Suarez and Edinson Cavani,  Uruguay can make easy the difference in any game and score lot of goals to any team.

(10)World Cup winner betting odds Colombia – 35.46: Regardless their amazing talented players Colombia didn’t had great results at the previous world cups. Colombian fans were always very passionate  and had  high expectation ahead world cup competition. Hence James Rodríguez team mates will have to work hard if they want to make a whole country dream and keep them happy. As a sad memory 24 years ago, Colombia had entered the 1994 World Cup in USA among the favorites to win, led by fantastic team with star goalkeeper Carlos “El Pibe”, Valderrama and forward Faustino Asprilla. But then the incredible happened. The squad lost 3-1 to Romania, and Colombia’s defender Andrés Escobar was murdered.

World Cup winner Betting Odds. Football fans around the world should check out and keep up-to-date with all the match action as it happens via our FootballBetExpert  advanced widgets and we’ll also have live updates on our Twitter and Facebook accounts. 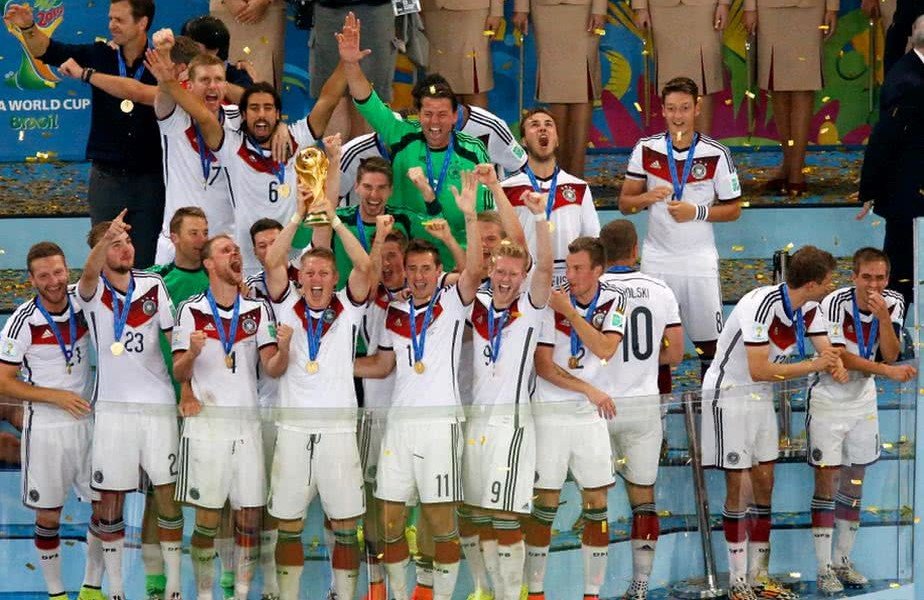