Man City’s unbeaten run ended at Anfield last Sunday after 4-3 defeat to Liverpool (Click here to read all details about this spectacular game). Pep’s Guradiola’s team will now prepare to play Newcastle United for the second time in the Premier League in less than one month. It is interesting to see if Rafa Benitez will be approaching this game in a defensive manner again after last months 1-0 defeat where he ‘parked the bus’ in front of the Man City gate.

In terms of the Premiere league table  Man City are still 12 points clear ahead of fellows Man United’s home game with Stoke on Monday night.

It’s only three weeks since Manchester City beat the northern side at St James’ Park stadium, when Raheem Sterling scored the only goal of the game to secure all three important points for Pep Guardiola’s.

It is not very common that a top team like Man City will lose 2 consecutive games. Therefore it is expected that Pep Guardiola’s team will play very offensive, with aggressive pressing from the first minute. Sané ,Raheem Sterling, Ederson, Kyle Walker, Fabian Delph, Nicolas Otamendi, David Silva, De Bruyne, Fernandinho and Sergio Aguero are all expected to be in the starting line-up.

On the other hand it is certain that Benjamin Mendy, Gabriel Jesus and Phil Foden will miss out and it is not decided yet whether Vincent Kompany is fit enough to return. Fabian Delph injured himself against Liverpool and we’ll have to wait to know whether he is ok to play against Newcastle in Saturday’s game.

In this type of game against Manchester City it is very hard to keep possession, as most probably Newcastle will “park the bus” and their defense will barely have time to catch breath. It is most certain that Rafa Benitez will approach this game in a defensive manner and try to hit Man City with devastating counter-attacks, armed with speed and precision.

Spanish defender Jesus Gamez is side-lined after undergoing an operation on an ankle tendon injury last month. Meanwhile,  good news for Benitez is that Florian Lejeune is making good progress in his rehabilitation from a foot injury.

Aleksandar Mitrovic has returned to training this week after recovering from a back injury.

Newcastle United defender Stuart Findlay will remain on loan at Scottish Premiership side Kilmarnock until the end of the season.

It is not very common that a top team like Man City will lose 2 consecutive games. Therefore it is expected that Pep Guardiola’s team will play very offensive, with aggressive pressing from the first minute. On the other side  it will be very difficult for Newcastle to keep possession, therefore most probably Rafa Benitez team will approach this game in a defensive manner and try to hit with devastating counter-attack, armed with speed and precision. 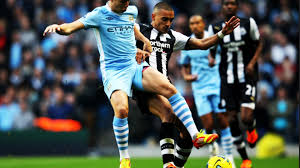