Liverpool vs Tottenham will certainly be a big fight for one of the top four positions in the Premier league, one of the places that allows participation in the Champions league.

Jurgen Klopp’s team are unbeaten in 14 Premier League matches and “hungry” for revenge against Tottenham, who destroyed them 4-1 at Wembley back in October. Furthermore, a success on Sunday would move them five points clear of Tottenham. On the other hand the history indicates that from 25 Premier League encounters between these teams at Anfield, Tottenham have won only two. However, it is interesting to see if Tottenham can repeat the excellent form they showed in the 2-0 win over Manchester United at Wembley on Wednesday evening.

German Boss concern is their infernal schedule in the Premiere League with 3 games in a week which makes it impossible to play good all the time. However, he rotated his players for the win at Huddersfield in mid-week, and there is plenty of competition in central midfield, with Alex Oxlade-Chamberlain, Emre Can, Georginio Wijnaldum, Jordan Henderson and James Milner all competing for the three starting spots.

Liverpool’s Manager has few injury worries going into this game:

International Adam Lallana is a doubt for Sunday’s clash with Tottenham Hotspur after a long-term serious injury endured during pre-season last summer.

Nathaniel Clyne remains a long-term absentee as he recovers from back surgery and his expected return date is cople of weeks.

Ragnar Klavan will absent  this game due to muscle problems.

Finally, Rhian Brewster has  ankle problems and is  expected to be back In the next three months

Tottenham – Premiere League schedule is very severe with an infernal 3 games in a week which makes it so hard to play good in every single match. However, it seems that MAURICIO POCHETTINO has handled this situation very well and has found solutions to alternate his players so they can be fresh to focus and give their maximum in every game. Hence, his philosophy is to play only players that are 100% fit.

4-1 won Tottenham in October 2017 against Liverpool at Wembley Stadium.

Toby Alderweireld (Hamstring).The Belgian injured his hamstring back on November 1st  in the win against Real Madrid at Wembley Stadium and he’s now beginning to integrate with first team training.

Danny Rose (Knee).The left-back is back in training after suffering that setback to the knee injury that had kept him out for ten months before.

Serge Aurier (Calf) The Ivorian right defender came off injured in the second half of the 1-1 draw at Southampton, however, it seems that was only a small knock.

He was rested and is very possible of being fit 100% for Wednesday game against Man United.

Hugo Lloris (Illness) Tottenham’s goalkeeper and captain was ill early last week, before Eriksen and he’s available for this game.

Erik Lamela (Bruised gluteus muscle). Lamela’s has spent 13 months out with a hip injury, however, he available for the game against Liverpool. 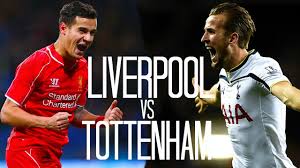