A game between two of the teams with great tradition in the international football. Arsenal are desperate to win tonight at San Siro and keep their season alive. They are out of form and Arsene Wenger is under major pressure at Arsenal. Gunners boos is trying to infuse the players with confidence and produce a good performance in Europa League to save this disastrous season. On the other hand AC Milan are enjoying a very good form and have improved immensely since club legend Gennaro Gattuso has taken the wheels.

AC Milan are in the middle of their best unbeaten run in nine years, having won six of their last seven Serie A matches and unbeaten in 13 matches in all competitions.

Milan have lot of interesting players such as Hakan Calhanoglou the most dangerous free-kick takers around, while left-back Ricardo Rodriguez boasts a brilliant left foot. Furthermore, Suso is now one of Milan’s best players, both technically and in the way he can decide a game at any moment through a piece of skill, like a free kick, a dribble, or a long-distance shot.

For Milan, Luca Antonelli, Ignazio Abate and Andrea Conti are all out.

Arsene Wenger’s men travel to Italy on the back of four straight defeats in all competitions. Having lost to Tottenham, Man City and, most recently, Brighton in the league, their chances of Champions League qualification via the Premier League have all but ended.

Hector Bellerin is missing from the Arsenal squad, with the right-back absent with a knee injury, with fellow defender Nacho Monreal also left at home as he failed to recover from a back problem in time to be involved.

Alexandre Lacazette (knee) is out while club-record signing Pierre-Emerick Aubameyang is cup-tied. Danny Welbeck is the only recognised senior striker available to manager Wenger.

Pierre-Emerick Aubameyang is ineligible for this tie and Alexandre Lacazette remains sidelined (knee). Mesut Ozil and Henrikh Mkhitaryan could feature, along with Danny Welbeck.

Bet On Milan vs Arsenal. Football fans around the world should check out and keep up-to-date with all the match action as it happens via our FootballBetExpert  advanced widgets and we’ll also have live updates on our Twitter and Facebook accounts. 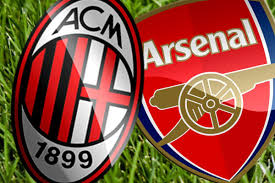