Tomorrow, 6:30 pm GMT+1 at the Etihad Stadium, Manchester City have a invaluable chance to claim a fifth league title against their local rivals from Man United. This will be incredible the 176th  derby between these two giant teams. Live TEXT on FootballBetExpert

After losing 3-0 against Liverpool in Champions league, Guardiola may decide to rest some players and  keep them vigorous for the second leg.

Sergio Aguero has been out with a knee injury for a month will undergo a fitness test in training on Friday to determine whether he can play against Manchester United.

Benjamin Mendy is in training after a knee injury and might make his return to the first team.

Fabian Delph has been out of the squad since he was sent off at Wigan, as a result of suspension and injury, but he returned to the bench against Liverpool and could be recalled.

Jose Mourinho are fighting to consolidate the 2nd place in Premiere League.

Man United Boss has confirmed Daley Blind, Phil Jones, Marcos Rojo and Marouane Fellaini  are back training with the team and might start against City. Aslo Nemanja Matic and Paul Pogba are also expected to start tomorrow from the first minute.

Stay tuned as we’ll bring you all the latest news, rumors, statistics, juicy news and everything else ahead of  Man City vs Man United

Bet on Premier League✅ Betzest™ Get $/€5 no deposit, No wagering 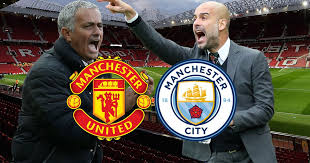