Barcelona beat Chelsea with 3-0 and advanced to Champions league Quarter Finals. Leo Messi (30th years old) captain of Argentina at Football World Cup Russia 2018  is in marvelous shape. Last night he registered his fastest goal in the Champions League and also he reached 100 goals in the competition joining the Champions League 100 club Top goalscorers. Cristiano Ronaldo is best goal scorer ever in CL with 117 goals and 148 games played.

A fixture with more than a little history brings this round of the Champions League, as this is the third most-played derby in Champions League records, after Bayern versus Real and Barcelona-Milan. That is a proof that both teams have the capability to progress through the latter stages.

Chelsea played a fantastic first leg and Barcelona were lucky with the away goal of Lionel Messi to not lose. Therefore Barcelona will certainly need to be very focused and play at maximum capacity if they want to reach the quarter-finals of the Champions League.

Barcelona have fresh injury ahead of the Champions League game with Chelsea. Denis Suarez ( 24-year-old) picked up an adductor muscle strain to his left leg during the Catalan Super Cup game against Espanyol last week and midfielder will be out of action for around 15-20 days.

However, Valverde will likely bring in Andre Gomes to the midfield, with Paulinho, Sergio Busquets and Ivan Rakitic keeping their places in the middle. Nélson Semedo and Yerry Mina are out.

Finally Barcelona will test  the fitness of midfielder Andres Iniesta, who is struggling with a hamstring problem.

Leo Messi recently signed a new contract with the club until 2021 and he has a release clause of £625m.

Chelsea are unbeaten against Barcelona in eight matches, since a defeat at Stamford Bridge in the 2005/06 round of 16.

Chelsea is without several players through injury.

David Luiz who is still struggling with a knee injury, while Tiemoue Bakayoko has not featured since being sent off against Watford last month, Ross Barkley has played just three matches all season and Antonio Rüdiger is doubtful for this game as well. 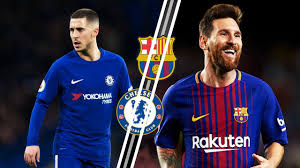