Arsenal vs Man City will face each other for the second time in five days on Thursday 1st of March in the Premier League. Therefore manager, Arsene Wenger got an immediate chance to avenge a 3-0 Carabao Cup final defeat against Pep Guardiola.  The league leaders are 13 points clear of second-placed Man United & 27 points ahead of Arsenal. Hence they need six more wins to be crowned Premier League champions having won 23 of our 27 matches so far this season.

The game is vital for Arsenal hopes of making the top four and Wenger’s men must forget their cup disappointment quickly and turn their attentions back to the Premier League. Hence, Arsenal now sit 10 points behind fourth-placed Tottenham with a game in hand, and anything less than a win against City, will likely leave Europa League glory as the only route back for the Gunners into the Champions League next season.

Nacho Monreal is a doubt after being substituted off early in Sunday’s Carabao Cup final due to injury.

Sead Kolasinac, who replaced the Spaniard, could start against City at the Emirates, but it depends on whether Wenger will continue with the three-man defence which started on Sunday, or would revert to a back four.

Pep Guardiola is unstoppable and claimed his first trophy in English football. Now he has placed winning the title at the top of his list of priorities and believes the difficulty of City’s next six fixtures means complacency simply isn’t an option.

He has invented and implemented  a progressive, dominant and spectacular football everywhere he coached: intelligent and colorful football inspired from Catalonian modernism. Today he does also miracles in Premier League, but of course football is also hazard, so he will need to work hard and keep his team focused at maximum in every game in order to succeed and reach the target – premier league title.

Man City Manager has little worries to his squad as striker, Gabriel Jesus could come into contention after almost two months out due to knee injury. Fabian Delph remains suspended. Oleksandr Zinchenko or Danilo could feature with Benjamin Mendy out for long term due to knee injury.

City’s number one goalkeeper Ederson should retain his starting role despite Claudio Bravo’s Carabao Cup final assist for Sergio Aguero, while winger  Raheem Sterling’s is unlikely to be fit in time to face Arsenal on Thursday because of a hamstring injury

Brazilian Midfielder Fernandinho has played in every one of City’s 27 league games so far this season,  but is ruled out for this game with the hamstring injury he picked up in the in the Carabao Cup final win over the Arsenal on Sunday.

Stay tuned as we’ll bring you all the latest news, rumours, statistics, juicy news and everything else ahead of  Arsenal vs Man City

Bet On Arsenal vs Man City. Football fans around the world should check out and keep up-to-date with all the match action as it happens via our FootballBetExpert  advanced widgets and we’ll also have live updates on our Twitter and Facebook accounts. 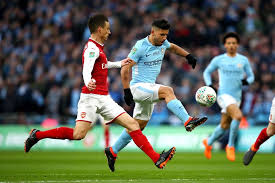