Arsenal vs Chelsea. This is eternal London derby between two teams that had clashed competitively more times than any other opponent: tonight is their 193rd meeting.

Following the hectic Christmas & New Year schedule, a second victory in three league visits to the Emirates Stadium would lift Chelsea 10 points clear of the Arsenal, who currently lies sixth in premiere league standings.A draw tonight would be satisfactory for neither side so it announces a battle with both teams fighting for the 3 points.

Arsenal’s Manger Arsene Wenger, has big ambitions in 2018 and wants his team to win all the games and fight for every point. After controversial late penalty at West Bromwich  on New Year’s Eve, Wenger should find the way and  motivate his players for tonight’s derby with Chelsea.

Arsenal has a long injury list. They lost Kolasinac (he hurt his ankle and it could settle in a week, or two weeks) in the West Brom game and Koscielny (Achilles it flared up again).

They had already Nacho Monreal (ankle), Giroud (hamstring), Ramsey (hamstring), Cazorla (ankle), Ozil (knee – doubt). The only player who has a little chance to be available for tonight’s game is Ozil.

Ex champions Chelsea are in fine form and have only lost once since the end of October 2017, winning 10 of their 14 matches as they have hit top gear. In the corresponding fixture last season, Chelsea won 3-0 against Arsenal after an awesome first-half. Also Chelsea have beaten Arsenal twice at Wembley Stadium – in the Emirates FA Cup final and the Community Shield.

In a 3-4-3 system, Antonio Conte prefers Eden Hazard drifting inside from the left and Pedro running in behind from the right.

However, in the 3-5-2 Pedro is sacrificed, with Hazard taking up his favored central position. In this role Hazard is excellent at combining with Alvaro Morata.

This is not all Chelsea’s right-sided defender Cesar Azpilicueta, provide excellent crosses to Morata that is particularly prolific with his head.

Stay tuned as we’ll bring you all the latest news, rumors, statistics, juicy news and everything else ahead of  Arsenal vs Chelsea 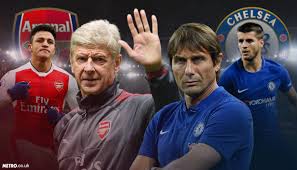